After the invitation of the local government of Prizren (Kosovo) in 1959. to design a new building of the Teacher’s School, Zloković proposed that the school is to be designed as prefabricated with consistent application of modular coordination, showing the investor that the new building will certainly be more rational than traditional construction, without hampering functional organization. This proposal was accepted, so Prizren received the first building built in this way in Yugoslavia. Zloković designed the school in cooperation with the architects, son Đorđe Zloković and daughter Milica Mojović, according to a program that envisaged a school capacity of about 300 students in one shift. The location had a falling terrain over which an imaginary urban raster with a density of 90 M (modules), i.e., 9 meters, was placed, with the connection of this orthogonal system to a certain reference point. Then, a three-storey school block was placed in this raster, which was designed over a continuous design network with a density of 18 M, which is 1.8 meters in a longitudinal structural system of prefabricated type (according to the then standard at that time, the basic module 1M was 10 cm). An annex was built next to the school, connected by a covered porch, and it houses a gym (multi-purpose) hall, two workshops and two smaller apartments. The internal organization of the school is based on the hall system, which meant that instead of long corridors, the classrooms were grouped around a spacious hall in which exhibitions could be organized. On the ground floor there is an administration, a library with a reading room, a hall for cinema projections, rooms for social activities and a kitchen, while on the first and second floor there are classrooms and cabinets. The building is constructed in a skeletal system with prefabricated pillars and hollow ceilings. In order to reduce the formwork and scaffolding to a minimum and to obtain ready-made treated surfaces, prefabricated columns, prefabricated elements that are filled with concrete and prefabricated facade parts were used. In the external finishing of the building, a system of prefabricated elements is manifested in the finishing, and the spacing of the window openings is based on a constant basic spacing resulting from the basic prefabricated assembly. 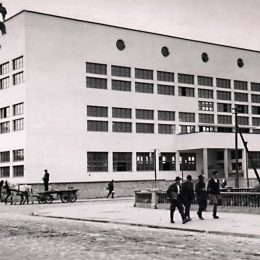 Jagodina, Serbia
1937–1940
With the design of the primary school in Jagodina, Zloković established himself as a leading modernist in Serbian interwar architecture, whose works represent the refined achievements of a unique proceeding, in which a coherent and rational attitude towards architecture in all its humanistic and technical aspects is manifested.
Read more