By creating better material conditions for market-oriented tourism, in the early 1960s in the tourist areas of Yugoslavia, several significant realizations of tourist facilities were created, which gave impetus to future mass tourist construction, including the complex of a new tourist settlement in Ulcinj (Montenegro), designed by Zloković in collaboration with the architect’s son Đorđe Zloković and daughter Milica Mojović. The settlement was built on a steep slope above the sea, which affected the contour of their transverse profile, and in addition, it was entirely aimed at preserving the existing trees, as an important element of the authentic ambience. Therefore, one of the basic features of this settlement is the urban disposition of hotel facilities. A road passes by the settlement, which connects it with the secluded center of Ulcinj. The arrangement of the terrain – landscape between the buildings is adjusted to the positions of the buildings, so that part of the ground floor is partially cascaded with the help of stone borders and sustaining walls and embankments. Stairs that are pulled out of the hotel buildings from the outside, in addition to access to the apartments, also enable communication around the buildings, thus creating a unique system of movement through the settlement. In addition to the functional significance, a special ambient character of the densely built agglomeration on the slope by the sea was formed, which gives a reminiscence of the old Mediterranean settlements. The settlement consists of seven three-storey buildings with a total capacity of 480 beds. In six buildings, one-bedroom apartments with bathrooms and loggias have been designed, which are oriented towards the coast and the old Ulcinj Fortress, while in the seventh building here are single and double bedrooms and separate block with toilets and bathrooms. The structure is typified with transverse load-bearing walls. In all three spatial directions, modular coordination was applied using a project module of 6 M = 60 cm, via a discontinuous design network. This system also enabled fast construction, so the entire complex was completed in less than seven months, despite the then weak traffic connections. The gable walls of the hotel buildings are lined with natural stone with inserted insulation between the stone and the walls, made of hollow prefabricated concrete blocks. 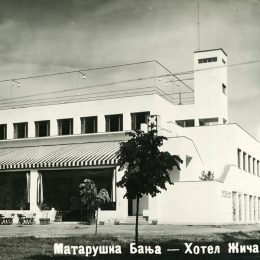 Mataruška banja, Serbia
1931-1932
Hotel Žiča, owned by Hovan Desider, is the first modern hotel in Serbia, whose architecture combines Western modernist practice in designing this typology and Zloković's unique prose, then still in the development phase, aimed at researching proportional relations, which were initially applied by determining optimal surfaces of the main contents and the composition of the basic volumes.
Read more 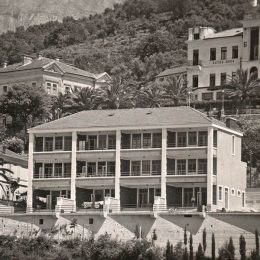 Montenegro, Herceg Novi
1934
During the thirties of the 20th century, due to the development of modern tourism and strengthening of tourist activities in Yugoslavia, the focus of tourist construction was on private initiative, i.e, on private investors who invested in the construction of accommodation and catering facilities (hotels, boarding houses, and villas) contributed to the improvement and modernization of the tourist offer.
Read more